Manchester City played a out a rare 0-0 draw with Liverpool at Anfield on Sunday and one City star player was not happy with Guardiola for different reasons.

Manchester City forward Gabriel Jesus said he was not happy with Pep Guardiola’s decision not to allow him to take the late penalty against Premier League rivals Liverpool. City manager Guardiola prevented Jesus from taking the 86th-minute spot-kick, instead opting for club-record signing Riyad Mahrez. 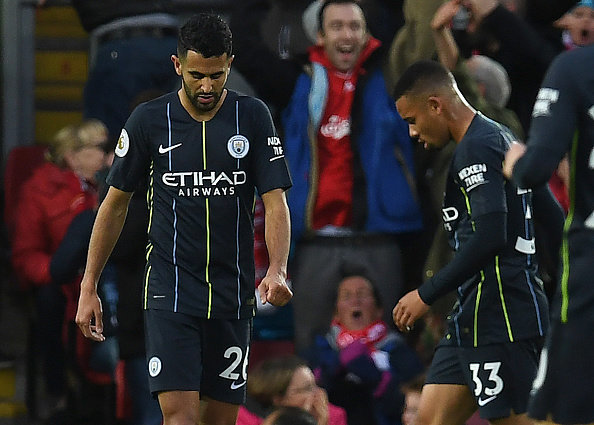 The Algerian star fired his effort over the bar, squandering Manchester City’s best chance at three points as the champions drew 0-0 at Anfield on Sunday. Guardiola apologised to Jesus afterwards and the 21-year-old Brazil international insisted he felt confident to take the penalty.

“Obviously I’m not that happy,” he told reporters. “As Riyad, I’ve been practicing [penalties]. “I would like to have taken it. I was confident, so I was not happy that they did not allow me. However, it was important that we didn’t lose. Pep spoke with me.

“This is part of football, sometimes these things happen. I will support Riyad if the manager chooses him again.”Jesus has struggled for form since the World Cup, having scored just once in the Premier League this season – against Huddersfield Town in August.

Sergio Aguero would be seen as Man City’s primary penalty taker, but the Argentinian was taken off in favor of Jesus in the second half of Sunday’s match. Defender John Stones said Mahrez was “deflated” after the miss while adding that he too had full confidence in the former Leicester City attacker if he were to step up again. The man who conceded the penalty, Virgil van Dijk, was left relieved by Mahrez’s miss, which keeps Liverpool and Man City tied atop the league.

I think it was one of those rare mistakes which was made by Pep. But it wasn’t his fault as Mahrez had taken the most penalties in that Man City side on that pitch at that moment. So, it’s all down to Mahrez.